A tirade against testing 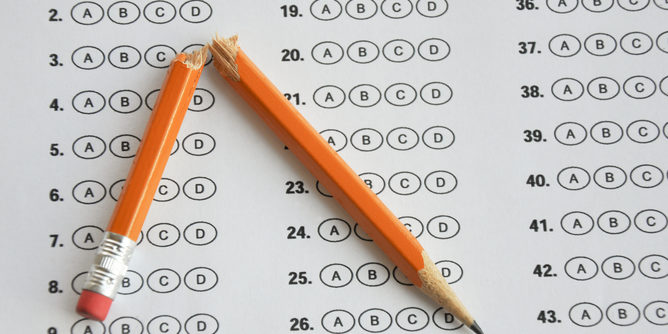 A story from a kindergarten teacher about testing (found here, in Diane Ravitch’s blog) prompted this tirade.

Yes, I know much has already been written about the problems associated with too much testing. Still, the use of standardized tests in the United States proliferates rather than diminishes. Americans, it seems, have an ever-increasing obsession with measuring and quantifying things. As evidence of this, consider that nowhere else in the world do standardized tests play such a large role in education.

According to a study from the Brookings Institute in 2012, we were at the time spending $1.7 billion annually on standardized tests in public schools. And a new study, from the Center for American Progress, has found that U.S. students are tested an average of once a month, with some tested as often as twice a month.

Of course, none of this indicates how much time U.S. students spend readying for tests, in addition to taking them. According to the Center for American Progress study, some states and districts highlight testing above learning, devoting time to test prep, practice tests, and even pep rallies. (“Rah! Rah! Let’s fill in those bubbles!”)

And all of this is despite what numerous experts have had to say: standardized tests are indicative of neither intelligence nor potential.

According to Peter Sacks, author of Standardized Minds: The High Price of America’s Testing Culture and What We Can Do to Change It, although the claim is that standardized tests determine a person’s potential for later success in school, college, and life, their actual ability to do so has been “awful.” Sacks says the “poor ability of the exams to tell us much about later performance has been true both for people who score well on standardized tests and those who do not.”

And what about the ability of standardized tests to measure intelligence?

Those who understand intelligence know that it doesn’t involve the mere accumulation of information. Intelligence involves knowing how to acquire information you don’t yet possess and, most important, knowing how to use it once you’ve got it. In fact, there is a statistical link between high scores on standardized tests and what is considered “shallow” thinking. Too often, those who score well are simply good at memorizing or at guessing which multiple-choice answers should be marked. Standardized tests do not require the understanding, creative thinking, analysis, synthesis, or application of information that are the hallmarks of in-depth thinking (you know, the kind we need to continue to innovate and prosper).

Moreover, standardized tests promote the myth of “one right answer.” Yes, two plus two will always equal four, and the right combination of hydrogen and oxygen will always produce water. But there is a real danger to our children if they grow up believing there is only one right answer to every question or problem.

First and foremost, when children become convinced of the value of one right answer, what becomes of their critical thinking skills? How can they trust in their ability to solve problems? Business leaders, in fact, are already finding themselves among such people. One of their chief complaints about today’s young employees is their inability to think creatively and to communicate.

And what of the content of these tests? How valuable is it in preparing our kids for their future?

As described in the aforementioned blog, kindergartners, who are developmentally not yet ready for abstract thinking, are being asked to determine whether or not it makes sense to play basketball in the market. And as described to me by a mom, the children in her young son’s class had taken a standardized test in which one of the questions was the following: What are windows made of? Her son checked “glass” as the answer – which seems entirely logical to me. Unfortunately, the test makers considered windows to be made up of “squares,” so his answer was scored as incorrect. (It appears it was more important for the test makers to fake out the children than to help them learn something.)

Are these the kinds of things that will prepare children for life and success in the 21st century?

Noted educator David Elkind declared in a BAM Radio interview, “Learning how to take tests is not what gets you ahead in the world, particularly in a global economy.”

Despite the truth so clearly evident in that statement – and despite the fact that decades of testing have done nothing to improve our children’s education – the politicians and policymakers still pound podiums in their righteous insistence that “more testing” is what we need for advancement in our classrooms – beginning, obviously, as early as possible.
What is it that they say about the definition of insanity? Oh, yes, it’s doing the same thing over and over again and expecting different results.

Much of this piece was extracted from What if Everybody Understood Child Development?: Straight Talk About Bettering Education and Children’s Lives.