Technology is not meant to replace human interaction! 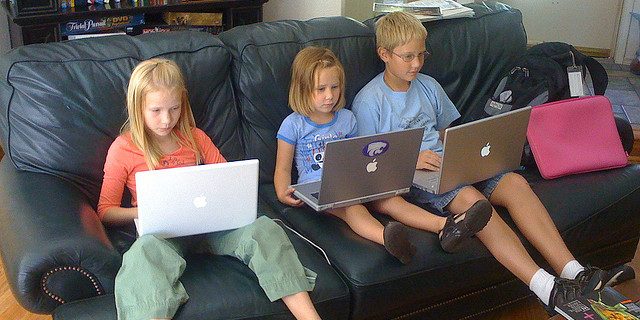 My stance relative to technology in early childhood is not a popular one among my tech-loving colleagues. They firmly believe that if technology is going to be part of children’s lives (and it is), children must begin experiencing and exploring it in their earliest years. At the other end of the spectrum are those who firmly believe that children will have the rest of their lives to stick their heads in the “sand” that is technology. That early childhood is usually the only phase in one’s life during which it’s possible to experience life fully and joyously, via all of the senses, and that that precious time shouldn’t be spent in a two-dimensional world.

As you may have guessed, I’m one of the latter.

Now, of course, there will always be those who call for a balance. (Typically, I’m among them.) NAEYC, the country’s largest organization of early childhood professionals, advocates for “both/and” thinking, as opposed to “either/or.” They recommend that early childhood educators use technology in meaningful, developmentally appropriate ways. For example, their executive director, Rhian Evans Allvin, wrote of children “in an American city visiting with their peers in a remote Eastern European community through Skype,” or a teacher “integrating a smart board with touchscreen technology in a group lesson about democratic society.” She cited these activities as representing “the integration of technology in ways designed not to replace human interaction but to enhance it.”

These points were driven home for me when I saw a Facebook post by a colleague who teaches college courses in early childhood education. Among them is a course called Teaching Art, Music, and Movement to Children (which, of course, gets a big “yay!” from me). Imagine my dismay when I read her post telling teachers of young children that if they want to do “Head, Shoulders, Knees, and Toes” or “You’re Happy and You Know It,” they should just sing it with the children rather than using a YouTube video.

Apparently her students do the latter “all the time.”

There’s simply no way a video or audio recording can substitute for the real thing.

One respondent to the Facebook post commented, “’in person’ activity needs to be ‘in person’, encouraging eye contact, giving smiles of connection, engaging…” She also pointed out that we’re already so worried about too much screen time for children that it made no sense to choose this way of doing songs with them. Another asked what would happen if a child didn’t know her or his nose from her or his knees, or had forgotten what order they’re in.

Relationships are the stuff of early childhood education! And did these students really believe that songs don’t provide real learning opportunities? Besides the fact that everything provides learning opportunities for young children (we don’t call them little sponges for nothing), songs like “Head, Shoulders, Knees, and Toes” and “If You’re Happy and You Know It” offer lessons in word comprehension and active listening (emergent literacy), body-part identification (science), patterning (math), and more. But those lessons will be lost, or at least less meaningful, if teachers aren’t responding to what they observe in the moment — not after a video has ended.

Using a YouTube video to teach songs to children is no substitute for getting down to their level, looking them in the eyes, smiling into their faces, and letting them hear, see, and feel the enthusiasm you have for singing with them! For teaching them. For being with them.