Make active play a part of their day! 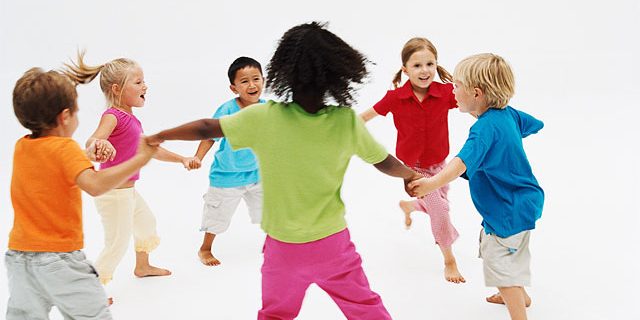 Do you remember being forced to play dodgeball in school? I do – and it’s not with fondness. I was terrified of that big, bad ball coming my way. Similarly, I remember being chosen last for teams, being eliminated from games because I wasn’t fast or good enough, and staring up in horror at the rope I was expected to climb, when I was afraid of heights, rope burns, and failure in general.

None of those activities endeared me to physical activity. In fact, my repeated failures in physical education classes meant that the thought of participating in any sport never once crossed my mind. So it’s ironic, isn’t it, that I ended up in a profession where I promote physical activity for children?

But here’s the thing: I love to dance. My mother used to say she’d rather dance than eat, so clearly, I am the recipient of those genes. As a result, I was the one (the geek?) who, along with my friend Kathy, was choreographing dances to Beatles’ songs and performing them on the elementary playground for the rest of the kids. That love of dance led me down a path to this crazy and wonderful career I’ve experienced for almost four decades – and has kept me more physically active than I otherwise would have been.

Often, during my presentations, I talk about the need for children to encounter as much success as possible in their movement activities. And, no, it’s not because I worry about their self-esteem. My primary concern in advocating for success is that children not learn to hate physical activity. They are born, after all, with a pure love of movement. It’s only through such negative experiences as being hit in the head with a ball or sitting against a wall watching everyone else get to play that that love gets squashed right out of them. And then what happens? They stop moving! Because someone who doesn’t feel comfortable and confident in their physical abilities will just look elsewhere for satisfaction – perhaps computer gaming or some such other sedentary pastime.

In case you haven’t heard, we have a childhood obesity crisis on our hands – and one of the primary causes behind this epidemic is the fact that children are leading such sedentary lives!

Now, I realize that the phrase childhood obesity crisis has been bandied about so often that it’s almost ceased to have any meaning. So I want to share some other words with you – words that I hope will be too shocking to be rendered meaningless:

We all know we’re living in the age of the bubble-wrapped child. Twenty-four-hour news cycles have generated so much fear that parents don’t even want to buy homes with staircases in them (just watch House Hunters on HGTV), let alone allow their children to go out to play. That makes their time with you even more important!

That means no pitting them against one another in competitive activities. That means no elimination games that keep them from participating and also feed that feeling of humiliation. It means offering challenges they all can respond to at their own level. For instance, if you ask the children to gallop, there will be those who can’t meet your challenge. But if you invite the children to move like horses, those who can gallop will and those who can’t will pretend to be horses. If you challenge the children to balance on just two body parts, those with lesser confidence in their sense of balance will stand on two feet, while those with greater confidence might balance on a hand and a foot, or perhaps on two knees. With either example, you’ve got children experiencing success (which they’ll feel if you point out all the many responses you’re seeing!) and becoming more confident in their abilities. That confidence will translate into a willingness to try even more challenges.

Eva Desca Garnet, writing in Movement Is Life, said, “Our biological need for movement is ensured by the sensation of pleasure in movement.” In other words, if it feels good, you’re much more likely to want to do it.

Being hit in the head with a ball or sitting against a wall just don’t feel good. But developmentally appropriate active play? That’s a whole other story!