“What Is That?”: How We Unwittingly Dampen Children’s Creative Development 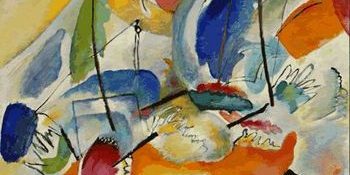 A young boy, whose teacher has assigned the class to draw horses, beams with pride at the blue horse he’s created. But his teacher returns his drawing with a grade of F, telling him that horses are either white, black, or brown. The young boy is confused, however, because in his living room is a painting by Franz Marc, in which blue horses roam a brightly colored field.

A first-grade class is asked to draw butterflies like the one the teacher has drawn on the board. One girl happily decorates her butterfly with purple polka dots. But she is scolded because the teacher’s butterfly does not have any polka dots.

These are two of many stories I’ve come across over the years. Another, more general, story came during a recent conversation with early childhood educator Amanda Morgan, when she mentioned the number of teachers she’s witnessed who “fix” the children’s works so they’re acceptable for posting, or for parents’ approval.

Naturally, all of these teachers believe they’re helping the children. Still, it’s easy to see how their insistence upon perfection and “reality” can put a damper on the children’s creativity and their future enthusiasm for creating. But even less obvious, more “innocent,” comments we make when children present us with their imaginative offerings can be detrimental to creative development. Asking “What is that?” is one of them.

It’s no surprise that we’re often stumped by the children’s creations. Is it a dog? Is it a firehouse? Could it be a swamp creature? But the simple fact is that it doesn’t matter what we see because we’re looking at these handiworks from our point of view – from an adult’s point of view. And it is the children’s point of view that matters. If they want to tell us what they’ve produced, they will. But, often, it won’t occur to them to inform us because it’s not as important to them as is the enjoyment they felt in creating it.

When we ask children “What is that?” we are not-so-subtly letting them know that it has to be something. We are valuing product over process – just as the teachers in the examples above did. We are telling children that the joy and excitement they felt in the process of creating doesn’t matter as much as our desire to see something we can identify.

Those who’ve been in my early childhood keynotes and trainings know that I’m a big fan of divergent problem solving – challenges to which there are multiple responses. I want to see it employed as much as possible, in as many content areas as possible, in early childhood settings because when children get into later grades, they will see little of it. Indeed, they will be presented with worksheets and standardized tests in which there is only one “correct” answer. And they will come to believe that this is the way of the world. They will come to believe that “smart people” are the ones who always know that one right answer.

But people who think creatively are those who can imagine. That means they can imagine solutions to problems and challenges requiring more than one answer. They can imagine answers to the question, What if? And because they can imagine what it is like to be someone or something else, they can feel empathy – a quality as much in demand in the 21st century as any other real-world skill. So it behooves us to encourage children’s creative development wherever we see it — because creativity is about so much more than art!

The important adults in children’s lives (you!) have tremendous influence over their attitudes. They can either help or hinder creative development simply by paying careful attention to their words. Perhaps the teachers of Picasso and Kandinsky (whose painting appears above, and a copy of which hangs in my office) at one time asked, “What is that?” If so, these artists were among the lucky ones who shrugged it off and continued to paint what they saw in their minds. But we can’t take that chance with the children in our care because the odds are far greater that if asked that question too often — or, worse, are the recipients of negative feedback — they will simply decide it’s not worth it and give up any creative pursuits!

Below are examples of discouraging phrases, followed by those that are more encouraging.

“There is no such thing as a blue horse” limits what is possible and dampens the children’s ideas. If we say, “I see you made your horse blue!” we validate their choices.

“I’ll show you how to do it” focuses on the “right” way and discourages experimentation. But “You try it; I’m sure you can” encourages creative risk-taking.

“That’s not what pots and pans are for” limits possible uses for materials and makes children feel that new ideas are not acceptable. If we say, “You’ve made some musical instruments out of the pots and pans!” we’re offering congratulations on the discovery.

“What is that?” focuses on the product rather than the process. But describing what we see – “You used a lot of purple in your painting!” – encourages without judgment. And that’s just the kind of encouragement children need for their creative development!