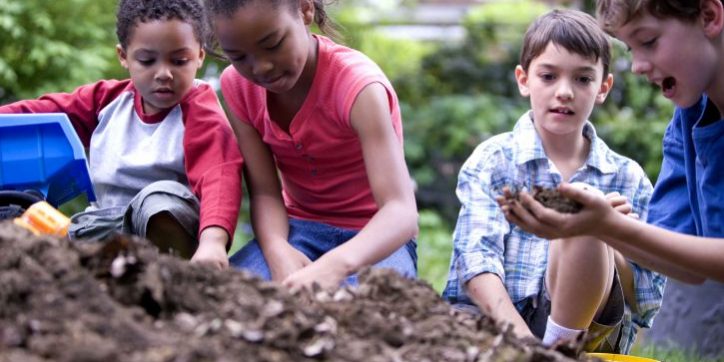 When I did my first professional development training in 1981, never in my wildest imaginings could I have foreseen that someday teachers would be complaining that children don’t know how to play anymore. I mean, how can that be? Pretty much every young animal on the planet plays. It’s how they learn to be who they are! Kittens stalk each other in preparation for stalking birds and mice. Puppies and fox cubs engage in rough-and-tumble play to learn social skills. When ground squirrels play, they go on to be better coordinated and better mothers. Many animals, it seems, play simply because it feels good.

Play is an essential part of nature’s plan. And if children are at a loss as to how to do it, then something is seriously wrong.

Think back to your own childhood. I’m betting that a great many of your memories involved playing – much of it outdoors. I remember games of pretend (frontier woman comes first to mind) that engaged me for days on end. I couldn’t wait to get outside to continue the saga. That dramatic play stimulated my imagination, and it has served me well in the years since.

I remember learning how to do cartwheels down the middle of the road. I didn’t go on to become a gymnast, but mastering that particular skill after much, much hard work demonstrated what I could achieve with determination and persistence.

And I remember the friends I played with. Interacting, negotiating, and creating with them absolutely taught me how to be part of a society.

So, when teachers tell me that children only know how to imitate characters they’ve seen on screens, or that they go outside and simply stand around because they don’t know what else to do, I want to cry.

Some of the reasons behind this aberration are painfully clear. Between digital devices and television, children have a multitude of images at their fingertips. They have no need to imagine because marketers and video producers have already done all the imagining for them. So, when asked to expand their minds and be inventive, children can’t get beyond what they’ve previously seen. Thus, their dramatic play involves characters and scenarios already familiar to them.

And, of course, there’s the out-and-out structure of their lives. Their days are scheduled beyond anything most of us experienced as children. We had downtime. We faced boredom. And we learned how to use both to our benefit. We had to problem solve if we didn’t want boredom to overtake us – and, frequently, we found our solutions in play.

Beyond the lack of downtime, overscheduled kids simply don’t know how to make decisions for themselves, because they’re used to being told what to do. It’s no wonder, between school and organized sports and lessons, that set free upon a playground, they’re at a loss as to what comes next. They can’t miraculously switch from being adept at taking and following orders to being self-starters.

Additionally, neighborhoods aren’t what they used to be. I would be quite pleasantly surprised to see someone practicing cartwheels outdoors these days – and not just down the middle of a street, but in a backyard! In our fear-entrenched society, parents are afraid to let their children go outside. So…they’re either enrolled in organized programs or indoors with their screens.

So, what are early childhood professionals to do when they discover that the children in their care don’t know how to play? The same thing they do with every other aspect of early childhood education: they facilitate learning.

Part of that facilitation comes in the form of offering children the space, time, and materials necessary to explore. If they’re not overscheduled in the classroom, and they have a variety of materials that stimulate the imagination, dramatic or constructive play are the likely outcomes. When there are plastic hoops, a variety of balls, and plenty of loose parts outdoors, active play is more likely to occur. But, even then, they may need more from you.

When a child is “stuck,” imitating a character or standing motionless on the playground, I encourage you to join the play, modeling the possibilities for taking the play further and asking questions that provoke new responses from the children – for example, “What do you think I should do with these twigs?” Once they’re engaged, you can simply step away, avoiding the temptation to make the play adult-directed and the possibility that the children will come to rely on you for what comes next. (I recently interviewed the fabulous Nancy Carlsson-Paige on this topic for Studentcentricity and she had more to add to this. You’ll find the 10-minute conversation below.)