As I mentioned in part one of this series of posts, there are obviously more than three things that have changed since I became an early childhood keynote speaker almost four decades ago. But there are three things I’m hearing most consistently from those in the profession. The first is that children can’t cross the midline of their bodies. The second is that they don’t know how to play anymore (as hard as that may be to believe, it’s true). And the third thing early childhood teachers tell me on a regular basis is that young children are seriously lacking in fine motor control.

On and on it goes – much of it coming from kindergarten and first-grade teachers. And the sad part is, this doesn’t surprise me at all.

There are two major reasons why. The first is that the little ones are far more likely to be holding a digital device these days than a crayon or pair of scissors. Go to any restaurant where families dine – or to a doctor’s office, or anywhere else parents and kids gather – and you won’t see a child coloring while the family waits. Heck, they’re not even talking to each other because they’re all too busy engaging with their own cell phones or tablets. If they’re using any muscles at all – besides their poor, tired eyes – it’s simply to swipe a screen.

Children who grow up swiping instead of coloring, cutting, and painting do not develop the fine motor skills they need to hold a pencil and write. To button and unbutton their clothes. To properly hold a utensil for eating. To grasp, squeeze, and release a stapler or bottle of glue. Etc., etc.

The second reason this trend doesn’t surprise me is that children are spending so little time crawling, running, jumping, or climbing these days. To those unfamiliar with motor skill development, that might seem like a strange connection. But, here’s the thing: Control over the body develops from the top to the bottom of the body, from the inside (trunk) to the outside (extremities), and from the large muscles to the small muscles. That means that until the trunk and large muscles are matured, the small ones in the hands won’t fully develop. This is nature’s plan. This is immutable. And this is why I’ve heard it said that the best way to help children learn to write is by letting them climb trees or swing on the monkey bars.

Below is the pattern of development, as depicted in Mary Mayesky’s Creative Activities for Young Children: 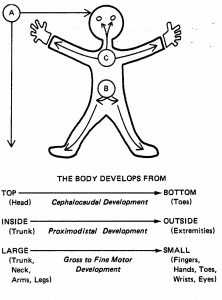 Of course, that doesn’t mean that children can’t practice their fine motor development until their large muscles are ready. On the contrary, young children should have plenty of opportunity to practice and grow their fine motor skills; and they should have plenty of appropriate materials and objects with which to do it. According to occupational therapist Christy Isbell, in her wonderful book, Mighty Fine Motor Fun, these include “a wide variety of open-ended materials such as paper, drawing utensils, glue, clay, and small blocks.” Christy also tells us that the children “should spend more time playing with manipulatives than practicing writing skills” – because if young children are pushed to write before their hands are physically ready, it may have a negative impact.

Naturally, while they’re doing all of this fine motor practice, they should also have plenty of opportunity to crawl, run, jump, and climb!

If you’ve read my posts, you know that I’m saddened – and worried – by all that’s being done to children these days. And, yes, I know that’s rather an aggressive way of phrasing it. But the children themselves are not making these choices. If it were up to them, they would be playing, as they were meant to do. And that play would involve and improve both large and small muscles, as it simultaneously developed their brains, resilience, problem-solving skills, and all the other wonderful attributes they were meant to learn through play. Instead, adults – either because they don’t know better or are in too much of a hurry, both in their own lives and for their children to grow up – are thumbing their noses at Mother Nature. And, sadly, children are paying the price.

Below is an 11-minute interview with occupational therapist Angela Hanscom, who explains what children need prior to being able to hold a pencil and write: