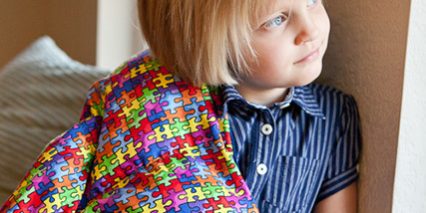 Think back to your own childhood and the amount of downtime you had. Do you remember lying on your back outdoors, looking for creatures in the clouds? Playing outside with friends and having the freedom to choose whatever game you wanted to play, or whatever drama you wanted to enact? Being alone in your bedroom, curled up on the bed and reading a beloved book, or quietly acting out a story with your dolls, action figures, or stuffed animals?

I remember all of those things. But today’s children won’t have such memories, because they aren’t being granted the same opportunities. Instead, too many of today’s children are leading overscheduled lives, with no time just to be.

Intuitively, we know that everyone, including children, needs downtime. No one, even the most energetic among us, cares to rush through their waking hours, day after day after day. We know how stressful it is to be overscheduled, over-pressured, and overwhelmed. We’ve witnessed the toll it takes on adults (on us!) – and it’s horrible to imagine children feeling this way.

Then, of course, we have policy makers like the Maryland school chief who declared it was time to do away with the “baby stuff,” referring to naptime in preschool. Similar attitudes throughout the country have resulted in preschoolers and kindergartners being forced to power through their exhaustion in order to spend more time on “academics.”

Unfortunately, such policies fail to take into consideration the research (again!). Dr. James Maas, an international authority on sleep and performance, has said that, among other things, being overtired leads to:

None of that contributes to optimal performance in a classroom! Moreover, Dr. Mary Sheedy Kurcinka, author of Sleepless in America, contends that “a very significant percentage of challenging behaviors are actually the result of tired kids.”

Yes, we want to help prepare our children for their future. But living an overscheduled, overprogrammed life isn’t the way to do it. That kind of childhood is laden with stress. And, according to Dr. Peter Gray,

Rates of depression and anxiety among young people in America have been increasing steadily for the past 50 to 70 years. Today, by at least some estimates, five to eight times as many high school and college students meet the criteria for diagnosis of major depression and/or anxiety disorder as was true half a century or more ago.

He attributes these mental health issues to a decline in free play – which, of course, is only possible when children have downtime.

We have to keep in mind, though, that even if mental health issues don’t arise, a lack of downtime means that a child will never learn to entertain herself. Will never be able to live inside her own head. To deal with solitude or quiet time — essential for problem solving and restoration. She may feel she absolutely has to be in the company of others, even panicking at the idea of keeping herself amused.

Imagination and creativity – ideas – arise from having time to think, to ponder and reflect, or just let the mind go. A child with downtime will engage in authentic play (self-chosen, self-directed, and without extrinsic goals) – alone and with others. Because play employs divergent thinking (a much-needed 21st-century skill), his problem-solving abilities will grow. If he has the time to carry out his plans and bring them to a conclusion, he’ll experience the satisfaction that comes from thinking things through and working them out. A child without such time develops only the ability to do what he’s told, when he’s told to do it. And that child isn’t likely to become an adult with initiative.

If we want children to grow up to be resourceful, they will have to start practicing now. You may no longer be allowed to include naptime as part of the day, but you can ensure that the children get some time to rest. You can also ensure that they get as much unstructured time as possible.