Who Says the Mind/Body Connection Isn’t Real?: The Magic of Cross-Lateral Movement 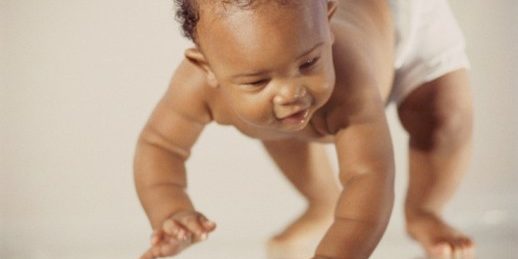 Cross-lateral movements, like a baby’s crawling, activate both hemispheres [of the brain] in a balanced way. These activities work both sides of the body evenly and involve coordinated movements of both eyes, both ears, both hands and both feet as well as balanced core muscles. When both eyes, both ears, both hands and feet are being used equally, the corpus callosum orchestrating these processes between the two hemispheres becomes more highly developed. Because both hemispheres and all four lobes are activated, cognitive functioning is heightened and ease of learning increases.

Those are the words of neurophysiologist Carla Hannaford, writing in Smart Moves: Why Learning Is Not All in Your Head, my favorite professional book.

And here are the words of a reading specialist who once, very publicly, as were consulting for the Sesame Street Research Department, took objection to a story I told about the role of movement in learning to read:

The only way to learn to read is by reading.

Regardless of that contention, in my keynotes and trainings, I frequently tell the story that Dr. Hannaford relates in Smart Moves: that of Todd, who at 16 years old, was still unable to read, despite the time, effort, and money his parents had invested in helping him learn.

All that changed when his mother discovered Brain Gym and learned about the Cross Crawl, an activity in which an individual stands and alternately touches right elbow to left knee and left elbow to right knee.

To make sure Todd did it, the whole family cross-crawled every morning before he went to school and every evening before he went to bed. Six weeks later, Todd was reading – at grade level! He even went on to join the basketball team, which previously wasn’t possible for him because, even though he was tall, he hadn’t been able to dribble a ball! And, following high school, Todd went to college, where he received a degree in biology.

Now, it may seem like a coincidence that following six weeks of cross-crawling, Todd was suddenly able to read (which is what the reading specialist contended – loudly). But if we re-read the words that open this piece, we see that cross-lateral movements activate both sides of the brain and stimulate the corpus callosum, which is the matter between the two hemispheres. Dr. Hannaford tells us that Todd had all of the information he needed in the hemispheres of his brain; the two hemispheres simply weren’t communicating across the corpus callosum. Doing the Cross Crawl, a cross-lateral activity that also requires crossing the body’s midline (the invisible line running from the head to the toes and dividing the body into right and left sides) got those two hemispheres talking to one another! And, voila!

In my presentations, I also relate the findings of friend and colleague Dr. Marjorie Corso, a now-retired physical education specialist, who conducted research on how body-space awareness transfers to paper-space awareness. One of her surprising discoveries was that children who can’t cross the body’s vertical midline tend to focus on the vertical of the paper, sometimes writing or drawing down the vertical center of the page and sometimes changing the pencil to the other hand at the midpoint of the paper. (A teacher told me recently that she’s also seen children switch from one side of the desk to the other in order to keep writing across the paper.)

Of course, it’s not surprising that the reading specialist was so adamant. In the first place, she was defending her job. In the second place – and this is the big issue – she couldn’t see the link between mind and body. How could reading, an activity of the mind, possibly be impacted by the actions of the body?

Unfortunately, I’m not one of those quick thinkers. You know, like Robin Williams was, with his lightning-fast wit. I tend to replay conversations in my head over and over and over again and finally formulate what I “should have” said somewhere between three hours and three days later! And what I realized I should have asked that reading specialist was, “How is it possible to learn to do something you can’t do by doing it?”

I realize we have a longstanding history of believing the body has absolutely nothing to do with how the mind works. But why should that be more difficult to believe than the possibility of somebody learning to do something they can’t do by doing it?

So, my call to action is: If you’re working with infants, make sure they get plenty of tummy time and opportunity for crawling! And, if you’re working with toddlers and preschoolers, Todd’s story shows that it’s not too late for cross-lateral movement to work its magic. Get them on the floor, pretending to be kitties, puppies, snakes, and spiders! Chances are good that, among other benefits, reading and writing will come more easily!