I realize this isn’t the kind of thing I typically write about – and it would certainly seem to have nothing to do with early childhood – but lately I’ve been thinking a lot about school shootings. I’ve found myself asking: What is it that incites such rage in these young people that they see killing as the only resort?

Immediately following all of these incidents, everybody talks about the need for better attention to mental health, in addition to gun control. I couldn’t agree more that that’s essential. But if you’re like me, you’re probably thinking about mental health as it relates to people old enough to purchase or acquire guns. People who have been bullied or ignored for so long that something finally snaps in them.

Upon reflection, however, I’ve realized we can probably assume that the kind of anger, frustration, and helplessness – the mental health issues – evident in school shooters doesn’t just suddenly crop up. It builds! And based on what I know to be happening in the education and lives of today’s young children, I’m firmly convinced that it often does begin in early childhood.

Let’s think about it. According to a 2013 report, depression affects approximately 4% of preschoolers in the United States today, with the number diagnosed increasing by 23% every year. And here’s a depressing graphic from 2013: 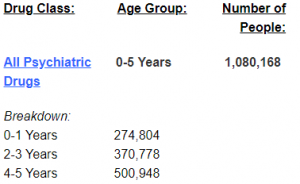 Why are so many preschoolers depressed and on psychiatric drugs? Yes, there are those whose conditions are inherited from parents. But I also read and hear enough stories from parents and early childhood professionals to know that we as a society are making an awful lot of little ones awfully unhappy. And why shouldn’t they be unhappy?

I’ve written about all of these issues — and more! — and reviewing them is pretty upsetting. So, imagine how the children feel, having to live with all of them. Imagine the frustration and helplessness building as their freedoms are taken from them, including the freedom to just be children. As they are given so little choice. As they become more and more disconnected from the real world and the people in it.

Some will snap. Not all of them, certainly, and not even the majority. But those who do will have, in one way or another, lost their lives. Lost the promise and the potential with which they were born. And they will have cost the lives of numerous others.

So, yes, unfortunately, this is a blog about both school shootings and early childhood. I fear that until we stop treating young children like small adults – until we start allowing them to experience childhood as it was meant to be experienced – we will see this kind of rage over and over and over again.

I apologize if I’ve depressed you too. This is by far the heaviest piece I’ve ever written. But we have to do more than wring our hands and weep copious tears when we hear of school shootings. Each of us has to keep fighting the good fight. Parents only want the best for their children, but they don’t always know what that is. Policymakers don’t always know — or seem to care — about the research concerning what’s best for children. That’s why each of us has to do our part to educate both groups. Each of us has to do whatever we can to create change!