Shouldn’t School Safety Drills Be Implemented with the Children in Mind? 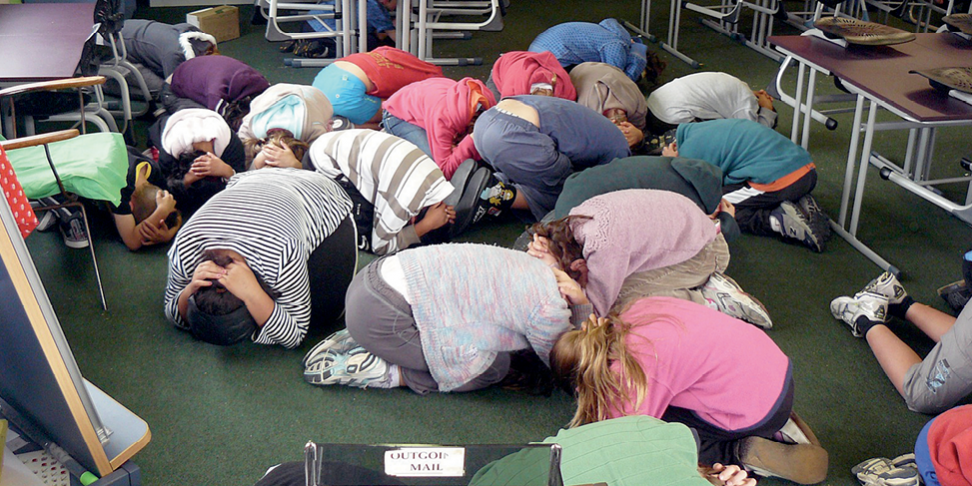 Would you believe me if I said there’s never been a safer time to be a child in this country? It’s true. But, yes, I know it’s hard to believe.

It’s hard to believe because, just lately, we’ve had several horrific school shootings. It’s hard to believe because we’re inundated 24/7 with news, much of which is fear-inducing. (In the “good old days,” if you wanted news, you had to tune in at either 6 or 11 p.m., and the three networks had half an hour to give it to you.) It’s hard to believe because we’ve become so accustomed to “worst-first” thinking that we’re no longer thinking straight. We’re doing everything from banning cartwheels on playgrounds to punishing parents who let their children go outside alone to implementing school safety drills that can do more to terrify children than keep them safe. And we’re doing it all in the name of prevention. As I’ve written before, one school banned cartwheels not because there had been any incidents of children getting hurt, but because the potential existed.

I do understand that school safety drills have become a necessity. They are intended to keep kids and teachers safe and, in this case, preparing for potential harm makes sense. But, as with all decisions concerning children, shouldn’t we keep the children in mind? Shouldn’t school safety drills take into consideration the children’s developmental levels and weigh the consequences of frightening them to the point of traumatizing them?

When I read Launa Hall’s piece, “Rehearsing for Death: A PreK Teacher on the Trouble with Lockdown Drills,” in the Washington Post, I was chilled. Then I took part in a #kinderchat on Twitter during which teachers commented on just how many drills, of varying kinds, they have to do every year – and I was stunned.

What Launa described – not to mention the drills I’ve heard about that involve staged killings and fake blood – certainly don’t seem to have been created with the needs of the children in mind. With the feelings of the children in mind. So I knew I had to do a radio show on the topic (see below). I wanted to offer teachers suggestions for making this less-than-pleasant part of their work less traumatic for everyone involved.

Here are the takeaways my guests offered following the taping.

“When young children don’t feel safe, they cannot learn. For some children, school is the safest place that they know. Therefore, prevention drills need to be done thoughtfully, in a way that protects children in the here and now as well as in case of future disaster.” – Lesley Koplow of Bank Street College

“… best practice in school crisis prevention and preparedness is to conduct multi-hazard emergency drills so that students and staff have the knowledge and skills to be able to protect themselves from harm. Decisions about drills should be made by a comprehensive school safety team and take into account the needs of the school community, recommendations of local law enforcement, and adherence to laws. Schools should begin with discussion and orientation with the staff so that they can model calm and confidence in carrying out the drills in developmentally appropriate ways. Students should be informed that these drills provide them with tools to be as safe as possible in the very unlikely event that there is danger. Educators should be aware of possible traumatic reactions, monitor the students for these, and provide access to appropriate mental health support if needed. More detailed guidance about conducting drills is provided by the National Association of School Psychologists.” – Amanda Nickerson, a professor of educational psychology who has studied the effects of safety drills on kids

“ If teachers’ districts are mandating increasingly realistic active shooter drills, I encourage them to initiate courageous conversations. The supposed safety increases from such drills come at a significant cost; each drill ebbs away the safe learning environment that educators strive daily to create for their students.
“I have heard it argued that drills to train students to fight back are far better than waiting for the worst in a closet. But I argue that is a false dichotomy. They are both terrible choices, and we as a larger society can do better to protect our children. As a schoolteacher, I will do my part to run efficient and reasonable drills to keep my students safe. But lawmakers also have a role in writing and passing sensible gun legislation. While no law will eliminate gun violence–there is no perfect solution–there are sensible measures we can legislate to curb it. Parents also have a role in pressuring their elected representatives to do more keep their children safe. We all have a role in this. If the choice of hiding in a closet or training little children to throw things at an assailant sounds like something out of a dystopian novel, then let’s work together to change that picture.” – Launa Hall

When I was in school – again, back in the good old days – we had fire drills. We lined up in single file and exited the classroom and the building. Administrators did not set fires throughout the school and firefighters did not rush in, hoses blasting, so that we might be more fully prepared for the real thing should it happen. The idea of frightening children in that manner apparently was considered preposterous back then. Apparently, it no longer is.

Here’s a list of books that support children after safety drills, which educator and clinical social worker Lesley Koplow provided :

I Will Keep you Safe and Sound, by Lori Haskins Houran

Inch and Roly and the Very Small Hiding Place, by Melissa Wiley

Over and Under the Snow, by Kate Messner