Advocating for Children Can Be an Uphill Battle 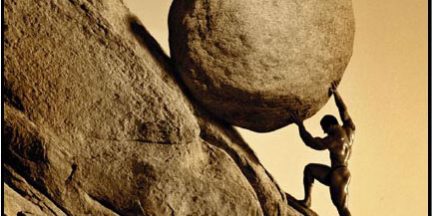 Do you know the story of Sisyphus?  In Greek mythology, this former king of Corinth was punished in Hades by continually having to roll a huge boulder up a hill only to have it roll back down as soon as he got it to the summit. I’m sure many of us have felt that way at certain times in our lives, but perhaps no one feels it more than the person advocating for children – especially if that advocacy involves play.

As I’ve written before, I’m not sure when play became a “four-letter word.” And I’m really not sure why we in this country insist upon practices – i.e., sitting and testing – that have been shown to be ineffectual. They say the definition of insanity is doing the same thing over and over again and expecting different results. Well, here we not only do it over and over again; also, we do more of it.

In May, I received an email from a distraught mother who also happens to be a teacher. The school her child attends, and where she teaches, had reduced recess for Pre-K and kindergarten students to 10 minutes a day. The reason, of course, was to “optimize instructional time.” I know you won’t be shocked to learn that, just in writing those sentences, I have a lump in my throat.

Not surprisingly, by November this woman – let’s call her Mary – noticed severe behavioral issues in her young daughter, including irritability, lack of motivation to attend school, meltdowns, and exhaustion. And Mary heard from several teachers that other students – especially those with ADHD – were being similarly affected.

Mary did everything I would have advised if someone asked me how to become an advocate. She brought the issue to her principal and spoke at length about the negative impact of the limited outdoor time. When she was told he couldn’t make changes to the schedule without permission from the central office, she began gathering research on best practices, play-based learning, and developmentally appropriate strategies for young children. She brought all of this to the assistant superintendent. Unfortunately, although he expressed genuine interest and gave the impression that the situation could be easily addressed, recess time remained the same.

Her next meeting was with the superintendent. At this point, Mary not only had research with her; also, she’d gathered data from a “day of play,” during which teachers filled out a form she’d created, documenting evidence of learning through play. The three-hour meeting proved futile, with her superintendent informing her “you can use research to prove anything.” And when she asked to be placed on the agenda for the next school board meeting, Mary was denied. Ultimately, she went to `the school board meeting, info in hand and supporters in attendance, and was allowed two minutes to make her case. Sadly, nothing has changed for the children.

Mary confided to me that, on more than one occasion, she was asked to drop the issue. And immediately following the school board meeting, her superintendent tried to get her transferred. Mary feels as though she’s committed career suicide, but she assured me that despite her low morale and the now-toxic environment at school, her belief in the cause – the children’s mental health – would keep her going. I’ve reached out to learn the results of her second school board appearance but have yet to hear back from her.

As I was writing this piece, I wondered why, exactly, I was sharing this story. As of yet, it doesn’t have a happy ending. In fact, it may lean more toward the tragic. But I did want to communicate the fact that there are passionate people out there who care very deeply for children and are fighting for what’s right for them.

But I also want to convey that, in advocating for children, we have to use whatever tools are available to us. That can mean putting ourselves in the shoes of those with whom we’re debating, no matter how wrong their thinking may be! For example, I can become frustrated when I have to advocate for physical activity by pointing out its contributions to learning – when physical activity should be valued in and of itself. Similarly, I advised Mary to use not just research on the value of play but also on the contributions of recess to improved academic performance.

Yes, it ticks me off that we have to do that. But the truth is, recess does contribute greatly to academic performance and there’s plenty of research proving it. And while Mary’s superintendent might dismiss research concerning play – something for which she obviously holds no value – she would probably be less inclined to snub information concerning better test scores and grades, as these are commodities that clearly matter to her.

There are many ways that we can fight back. You can hear some fabulous – and practical – suggestions in the podcast below. In small and large ways, just like Mary, let’s keep battling for what’s best for children. We have to believe that, unlike Sisyphus, we will get the boulder to the summit!