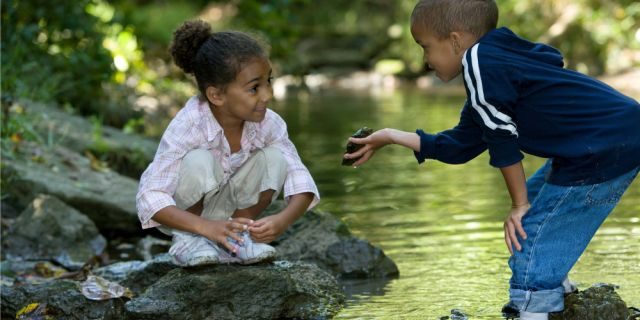 Have you seen the Hidden Valley ad in which they sit down with three generations of families and ask, “What did you like to do for fun as a kid?” (I’ve embedded the video below.) I watched it, cried, and then posted it on Facebook so others could watch it and cry. Because it’s cry-worthy – and not in a good way.

The older two generations, of course, had answers that involved the outdoors and nature: tobogganing, picking blueberries, building forts. And, as I’m sure you can imagine, the young generation responds with some version of “Play video games” or “Watch videos.” Perhaps what you can’t imagine is the amount of time they spend doing it, or their dependency on it. It will turn your stomach.

It’s been 13 years since I first read Richard Louv’s Last Child in the Woods: Saving Children from Nature-Deficit Disorder. I was appalled when I read the response of a six-year-old who was asked if he preferred the indoors or the outdoors. He said he preferred the indoors because that’s where the plugs are. I couldn’t imagine any six-year-old child – least of all a boy child – not wanting to be outside! Yet, 13 years later, things have only gotten worse. Not one of the children in the Hidden Valley ad prefers outdoor activities, choosing instead to sit on their bottom for hours at a time with eyes glued to a screen offering virtual reality.

I’m sorry, but you’ll never convince me that virtual reality surpasses the honest-to-goodness thing. I recently talked with a woman on a plane, who was just returning from taking her 20-year-old grandson on a trip to D.C. I was excited to know what they’d chosen to see during their visit. But she told me they hadn’t seen anything; they went bowling one day and to a movie another! Apparently, he had no interest in seeing anything in person because, as he told his grandmother, he could see it on his computer.

That story still stuns me! I live just outside D.C. and, trust me, pictures of the monuments and museums are not the same thing! But this is what happens when kids spend all of their time with virtual reality. It becomes their only reality.

Even if we fail to consider all of the potential physical and mental health problems that can arise from too much screen time, we can’t overlook the consequences of children losing their connection to nature.

Surely we can agree that books and electronics offer no substitute for the real thing. Being outdoors is an experience of the senses (which is how much of young children’s learning takes place). Outside there are myriad amazing things to see: creatures in the clouds, hummingbirds hovering, and four-leaf clovers. To hear: birdsong, leaves rustling in the breeze, brooks babbling. To smell: lilacs, rain-soaked ground, and Concord grapes. To touch: the velvety softness of a petal, a fallen feather, the bark of a tree, or mud puddles. There are even things to taste, like newly fallen snow or a freshly picked blueberry. And if you recall from your own childhood, even the simplest foods taste better outside. Somehow, a peanut butter sandwich is just a sandwich when it’s eaten in a kitchen, but make it part of a picnic, and suddenly it’s special.

Richard Louv coined the phrase “nature-deficit disorder” because he maintains that as children spend less and less of their lives in natural surroundings, “their senses narrow, physiologically and psychologically, and this reduces the richness of human experience.”

Indeed, to be human is to be part of nature. We evolved in the outdoors! And as much as we may have changed since our days as cave dwellers, our brains are still hardwired for an existence in nature. We therefore have an innate link with it that, when broken, leaves a part of us bereft.

Moreover, nature plays a major role in our aesthetic sense. Ecologist Stephen R. Kellert writes that the development of this sense is “instrumental in a child’s emerging capacity for perceiving and recognizing order and organization, for developing ideas of harmony, balance, and symmetry.” This is in addition to the primary benefit of our aesthetic sense: the heightening of our sense of beauty.

As Richard Louv writes: “When we deny our children nature, we deny them beauty.”

Finally, when we keep children indoors, we convey the message that the outdoor environment is of little significance. How, then, are children to learn to care for the environment? Why would they work to preserve something that they’ve been taught to disregard, or for which they have so little feeling? Considering our environment is all we have to live in (until scientists find a way for us to live on the moon), it’s to everyone’s advantage if our children learn to love and value it while they’re young. And that entails having firsthand experience of it.

I understand that parents are afraid. I can even understand why. But we need to get our priorities in order. The fear that keeps kids indoors is based on information that isn’t real. What’s happening to children as they lose their connection to nature is real…and we have some very real reasons to be frightened of the consequences.