The Real Dangers of Childhood: How Do We Help People See Them? 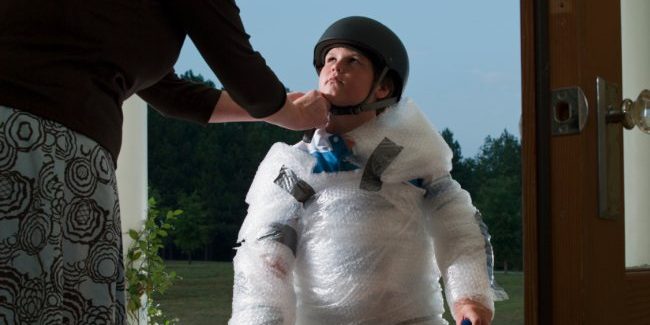 “I walked or biked to school for years, but my children don’t. I worry about the road. I worry about strangers. You can start to imagine evil on every corner. I do think they’re missing out. But I like to be able to see them, to know where they are and what they are doing,” stated a mom in a newspaper article called “Bubble-Wrap Generation: Our Molly-Coddled Kids.”

“[I don’t know] one friend of mine who can actually walk across the street without parental supervision…. Parents these days are completely paranoid!” wrote a 12-year-old girl in a letter to the editor of the New York Times.

“My daughter was always outside as a child, but my grandchildren aren’t allowed to step outside the door,” said an audience member following one of my recent keynotes.

“Because you never know who might be lurking in the neighborhood,” responded a friend, when I asked why her son wasn’t allowed to play outside by himself.

In this, the safest time to be a kid in America, parents – adults, in general – have never been more fearful. But it’s not just the “dangers” outside that terrify them. There are scary things happening inside, too!

“I worry about having stairs in the house because they’re dangerous for the kids,” says practically every parent searching for a new place to live on HGTV’s House Hunters. (Last week I watched a mom reject a house because a step-down from one room to another would be too hazardous for her six-year-old!) They also look at fenced-in yards from the vantage of the kitchen window and sigh in relief because they’ll be able to observe their children at play while cooking. And they demand an open floor plan, not because they like to be able to entertain guests while prepping food but because they’ll always be able to see their kids in the family room.

On Facebook recently, I tried to calm the fears of participants involved in a discussion about when it’s okay to let a child walk to school alone (junior high, said one, but only because she was watching from a hill). The general attitude can be summed up in the comment of another woman, who wrote, “It’s definitely dangerous to leave kids by themselves ever.”

Ever? Here’s one of the things adults truly should be afraid of: that children will grow up scared and anxious. It simply doesn’t make for strong, independent humans. In fact, this is already happening. The introduction to an article in Psychology Today, called “A Nation of Wimps,” states, “…parental hyperconcern has the net effect of making kids more fragile; that may be why they’re breaking down in record numbers.” (A must-read piece!)

In that article, social historian Peter Stearns is quoted as saying that parents have exaggerated many of the dangers of childhood while overlooking others, such as the demise of recess.

Yes!! And here are a few other things that should be causing concern in our “dangerous” society:

And this is just a partial list of the serious risks facing today’s children. But they don’t get the kind of press that crimes do. They don’t get the airtime – or even the conversation – that potential hazards do.

Clearly, it’s not enough to point out that children through the ages have been raised in homes with staircases and survived! That many of us remember playing, not just in the family room but in any darn room we chose, including the unfinished basement. That we walked, ran, and rode our bikes for miles, often without an adult in sight.

In that Facebook discussion, I shared the statistics showing that it’s the safest time to be a kid in America, and even the Center for Missing and Exploited Children has stated that stranger danger is a myth. The response I got? “Sex trafficking is real. Kidnapping, rape, and murder are real. I don’t live in fear, I live in reality!”

Yes, they’re “real.” They’ve always been real, but it never before stopped adults from allowing children to be children. The difference between then and now is that now potential danger is all anybody talks about. The result is that these potential dangers have become so exaggerated that our grasp on “reality” is now seriously skewed.

So, I’m at a loss. If statistics aren’t evidence enough, how are we to turn around this culture of fear? How can we allay parents’ — and teachers’ and administrators’ and policymakers’ — misplaced angst? It’s absolutely imperative that we do – because there truly is much to fear if we don’t.