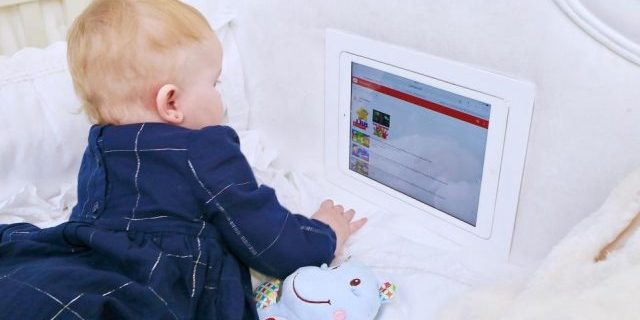 A colleague in London sent me a newspaper article about the cot (crib, here in the States) pictured above. The only positive thing I can say about this abomination is that the reaction to it – even among parents – has been negative. Thank goodness for small miracles.

I hear and see so many things these days — much of it involving screen time — that make me either want to cry or scream: Parents and children in restaurants, with everyone staring at a device, instead of talking to each other – or instead of children coloring and refining their small motor skills and creativity. Infants in carriages playing with a phone. Babies who have so little experience with books – and so much with screens – that, when handed a book, they try to swipe the pages. (That one really hurts my heart.) Often, I have to bite my tongue, lest I say something that could start a riot.

Why are people (parents, in particular) so misinformed? Why do they fail to understand the importance of language and the kind of interaction with three-dimensional items that offer a child multiple possibilities (rather than the singular response an app is looking for)? Why do they fail to understand the value of such tried-and-true activities as peekaboo and “This Little Piggy?” Is the rejection of such activities due to the fact that families are spread and far and wide in today’s culture, and therefore the older generation isn’t present to pass on such traditions? Is it due to the fact that these activities seem hopelessly old-fashioned? To the belief that anything new and shiny, simply by virtue of being new and shiny, must be better?

And why is everyone so unaware of the research showing a correlation between screen time and widespread myopia (and other vision problems), depression, aggression, anxiety, and language delays? Is it possible it’s such a well-kept secret that I’m only aware of it because I’m looking for it?

If you’re an early childhood professional, I’m asking for your help! First and foremost, please limit (or, preferably, exclude) screen time from your setting. Most children are certainly getting more than enough at home.

Also, please help spread the word about the research. Help parents understand how young children really learn! And make them aware of the dangers inherent in too much screen time. You can do it gently. Recently, I was at a gathering where a woman handed her five-month-old grandson her iPhone, saying, “He loves all the buttons and colors on this.” I smiled at her and quietly said, “Of course! You just want to be careful that he doesn’t get too much exposure.” I then briefly outlined what the research is showing.

Fortunately, you don’t have to look very far for support in this cause. Nancy Carlsson-Paige (one of my early childhood heroes) has recently authored a downloadable report titled, “Young Children in the Digital Age: A Parent’s Guide.” This 16-page report details six core ideas:

At the end of the report are suggestions for putting the six core ideas to use. You can download it here.

Also, if you want to help fight back against online preschool – and I hope you do! – click here to read a joint statement from Defending the Early Years and Campaign for Commercial-Free Childhood opposing its public funding. I’m one of more than a hundred who have signed the petition — but it’s not too late for you to join the campaign opposing this horrible idea!

As educator Diane Levin (another hero) has stated, young children are not passive recipients. I worry tremendously about what will become of today’s young children if they continue to be treated as though they are.