Keeping Kids Indoors: More Dangerous Than Sledding Down a Hill? 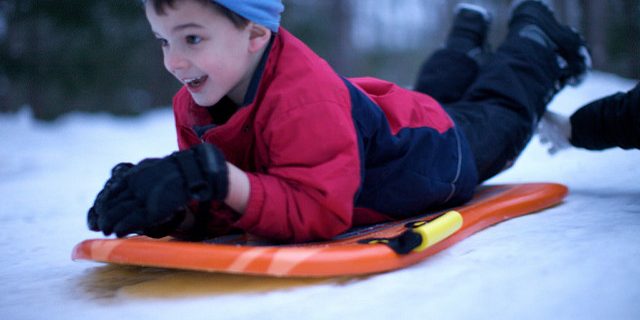 It snowed here in the DC Metro area recently. I wasn’t happy about it – because escaping “winter” was one of the reasons I moved here from New England. What did make me happy was driving past two hills and seeing kids with sleds!

Chances are good that, like me, you seldom see children playing outdoors anymore — primarily because adults have fallen victim to fictitious fears and believe that children must be kept indoors to be kept safe.

That belief is the reason for articles like this one found on Let Grow. The piece tells the story of a woman who saw children sledding, an activity she considered dangerous, and called the police. Unfortunately, this is not an uncommon occurrence. I follow Let Grow, and they share stories similar to this one on an almost-daily basis.

These stories make me want to weep. I remember the days when adults watched out for the neighborhood kids – not so they could report them or their parents to the police – but to ensure they weren’t in danger or making mischief. Neither of those things involved kids participating in such typical and non-threatening activities as sledding or walking home from school!

I’ve previously written that parents (or anybody who watches the news, or those endless crime dramas) are the victims of misplaced fears. When it comes to keeping children indoors, parents are ignoring the countless dangers relative to sedentary behavior. There’s also the “minor detail” that many of today’s children are experiencing a Vitamin D deficiency, the symptoms of which include the stunting of their growth, weakened muscles, and arms and legs that may not grow straight. Rickets, the softening of bones – a disease that at the turn of the 20th century was “rampant among the poor children living in the industrialized and polluted northern cities of the United States” – was pretty much eradicated by the 1930s but is again rearing its ugly head due to lack of natural light.

There’s simply no reason for all of this to be happening. Why aren’t the news reports blaring this horrifying information over the airwaves? Why is this not frightening parents – or any teacher who keeps children indoors when they should be having outdoor recess?

For both parents and teachers, here’s additional incentive in the form of recent research. A study by Nancy Wells determined that after contact with nature, children score higher on tests of concentration and self-discipline. In their study, Taylor, Kuo, and Sullivan found that children with ADHD are also better able to concentrate after experiences in nature. There’s even evidence that experiences in nature generate more positive feelings among children and result in less bullying. Fresh off the press is a study that determined a connection with nature creates less distress, hyperactivity, and behavioral problems among children.

And, of course, I haven’t even mentioned the adverse effects of so much fear on children.

I’ve said it before, and I’ll most certainly say it again: This is the safest time to be a kid in America. Yes, it’s difficult to believe, given the inundation of negative news to which we’re subjected. But I ask that doubters, whether they’re parents or teachers, consider the possibility that it’s true and weigh it against the many risks inherent in keeping kids indoors.

Remember the joy you felt as a child – whether it was careening down a snowy hill or racing to the playground for recess. Then pledge that the children in your care will have every opportunity to create such memories for themselves.