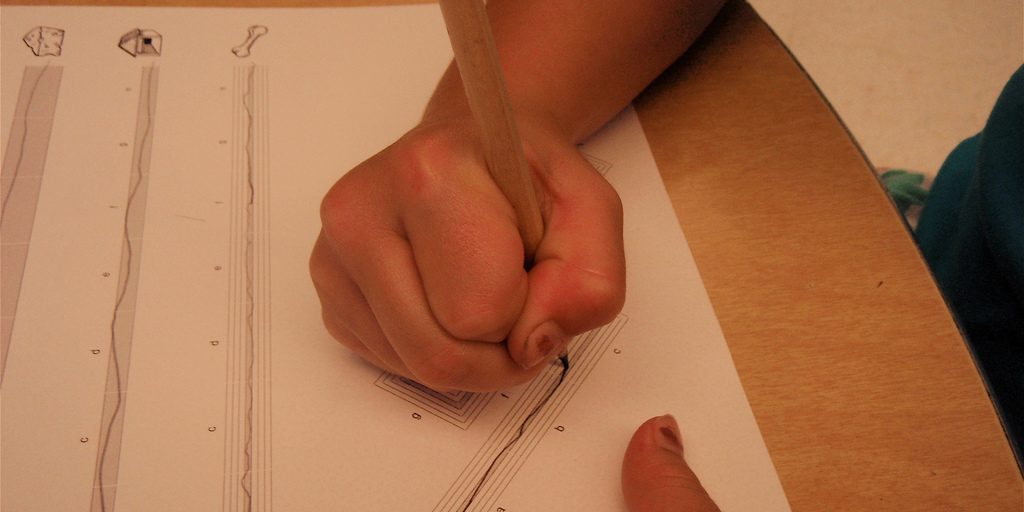 In a previous post, I wrote that according to many, many teachers, today’s children seriously lack fine motor skills. Teachers tell me that kids can’t grip a crayon or paintbrush, manipulate a pair of scissors, or properly hold a pencil. And I’m not talking about three-year-olds, who shouldn’t be expected to handle these things well; I’m referring to kindergarten and first-grade children.

Children who grow up swiping instead of coloring, cutting, and painting do not develop the fine motor skills they need to hold a pencil and write. To button and unbutton their clothes. To properly hold a utensil for eating. To grasp, squeeze, and release a stapler or bottle of glue. Etc., etc.

Such tasks may not seem like a big deal to those parents and teachers who see children’s future success in terms of what they will be able to do digitally. But we only have to stop for a moment and ponder the frustration of being unable to unbutton a shirt with ease. To fill out a form with a pen. Or to manipulate a knife and fork – particularly in public.

A stronger argument, especially when addressing the issue with parents, is that children without fine motor skills have very little chance to become celebrity chefs, fashion designers, or house flippers. With the popularity of such television shows as Top Chef and Chopped, parents can relate to the need for expert knife work. Project Runway has brought to light the finesse required of sketching, cutting, and sewing. And anyone who’s watched Chip Gaines or Tarek El Moussa on Fixer Upper and Flip or Flop, respectively, has witnessed the success that can result from skill in swinging a hammer and driving a nail.

Becoming a sports hero may also be problematic. It’s difficult to manipulate a baseball, golf club, or tennis racket when you don’t have enough strength in your hands and fingers. This is all too likely, considering the reports I hear about children without the strength to tear a piece of paper.

And then there are the surgeons. They may not be publicly famous, but surgeons are both well respected and well paid. However, they’ll be neither if they’re not also well developed in their fine motor skills. There are few professions, in truth, that require as much precise handiwork as that of a surgeon.

Of course, I had no proof that such professions would in reality pose a problem for children lacking in fine motor development. It was merely theory on my part. Until now.

A colleague sent me an article quoting Roger Kneebone, a professor of surgical education in London. In it he contends, “New medical students have spent so much time on screens that they lack vital practical skills necessary to conduct life-saving operations.”

Dr. Kneebone is part of a campaign working to return more hands-on creative subjects to the curriculum, which he states have a positive effect on the tactile skills necessary for a career in medicine or science. And, I might add, in cooking, fashion, carpentry, or sports.

I don’t know what it will take before parents and teachers realize that the “old stuff” (crayons, play dough, blocks) holds more value than the shiny new digital stuff – with fewer inherent dangers. Sadly, for now it appears that things are heading in the wrong direction. A recently published book for parents, which refers to the digital world as a child’s “new sandbox,” unfortunately is selling very well. And a new study determined that screen time for the under-two set more than doubled from 1997 to 2014, a year during which the little ones spent 3.05 hours a day in front of screens. I can barely stand to imagine what all that screen time replaced in their lives, or the host of health-related issues, many of which I’ve documented here and here, that will result from that much screen time.

Sadly, it may take a good long while before health and career-related issues become severe enough that an “aha” moment occurs. My fear is that it will be too late by then for an entire generation of children.

In the meantime, perhaps we can hasten that aha moment by pointing out that hours spent glued to the screen will do nothing to help develop and refine those tactile skills to which Dr. Kneebone referred. Those fine motor skills that will enable children to become capable of handling the life and professional skills requiring them.