A couple of weeks ago I mentioned that, due to bad weather in the middle of the country, it looked like I was going to be stranded in California — more than 2600 miles from home — for three days longer than I’d planned. The thought horrified me. If I was going to take a mini-vacation it certainly wouldn’t be at an airport hotel! What on earth was I going to do with myself? Besides, as I said, I was out of clean clothes and supplements; and my sweet Mickey and I missed each other. 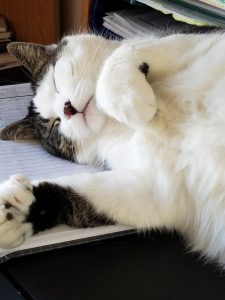 Honestly, when I woke up Sunday morning in a hotel room, instead of in my own bed, as planned, and read the text saying that yet another flight had been cancelled, I had visions of simply taking my roll-aboard and starting to walk. I was up for anything that would get me closer to home!

Unfortunately, when I tried calling American Airlines, I learned that it would be at least two hours before I could speak with someone. That was two hours during which I wouldn’t be making any progress. Two hours during which I wouldn’t know when I’d get home. Two hours wasted. That wasn’t acceptable, so I fired up my laptop and checked American’s flights myself – which was when I learned there was nothing available until Tuesday.

It was time for Plan C. (Plan B had been Sunday’s flight.) I looked up the number for Expedia’s customer service and called them for help. I told a lovely man named Charlie that there were a few airports within Ubering distance, and I asked him to check them, one by one, until he found a way to get me home that day. And he did! I ended up Ubering an hour and a half to San Diego and flying on Delta. Because of the time difference I didn’t get home until after midnight, but I didn’t care; I was home!

For years, I’ve been preaching about problem solving. Telling those attending my professional development trainings that the ability to solve problems is the one skill we can be certain today’s children will need in the future. This becomes increasingly clear as changes in our lives occur more and more rapidly, and as the world becomes smaller and smaller. But are schools focusing on that skill? No! They are, in fact, doing the opposite, with their standardized curriculums, standardized tests, and worksheets.

It infuriates me. I mean, unless a child is going to grow up to become a game show contestant, she will have little use for the information we ask her to memorize and regurgitate. Not only is this not authentic learning; also, without regular experience in divergent problem solving, a child will come to believe there’s only one right answer to every question. To every challenge. But, clearly, there isn’t. There wasn’t one “right” way for me to get home. There’s never just one way to stretch a dollar. To manage a busy schedule. To resolve a conflict. For those who can’t think outside the “bubble,” these can become insurmountable issues.

If children are going to be subjected to inflexible thinking in their elementary-school years and beyond, I fervently hope that you, as an early childhood professional, will help counteract the nonsense. And I assure you, it’s not that hard to do!

The trick is to implement divergent problem solving whenever possible. I used it all the time with movement experiences. For example, I asked children to:

As you can imagine, there are plenty of possible responses to these challenges! Just the latter one alone could result in 23 children showing you 23 different possibilities.

If one of the primary purposes of education is to teach children how to think, divergent problem solving is the method to use! But if we want children to become adept at filling in bubbles and spitting out facts that anyone can find with a Google search…well, then, we should just keep doing what we’re doing.