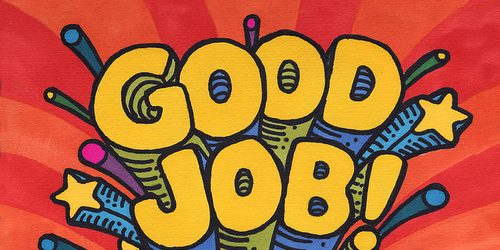 Do you often hear yourself saying “Good job!” to the children? I used to – a lot. I hear parents saying it all the time – for everything. And when I taught my university course back in the day, during every single class in which young children were present, my students said it at least a few dozen times in response to something the children had done.

I winced every time I heard it in class – and 20 years later I’m still wincing. I hear “Good job!” everywhere there’s a mix of adults and children: in homes, on playgrounds, in classrooms, in the grocery store, and on television.

The confusion has only deepened with the so-called self-esteem movement of the last couple of decades. Somehow, adults have been led to believe that they must do everything they can to give children self-esteem. While this belief – and the concept of verbally or physically rewarding children – may seem harmless, there are many problems with the idea of giving children self-esteem, not the least of which is that it isn’t possible. You can foster it, but you can’t offer it up like Thanksgiving turkey. Also, trying to bestow self-esteem through constant praise and rewards simply doesn’t prepare children for the real world. As the late Dr. Stanley Greenspan pointed out in another BAM Radio interview on this topic, “If you drown a child in praise, nothing has meaning.”

Sure, hearing “good job” the first few times – or receiving a treat – may make a child feel good. But the feeling is temporary. And someone is eventually going to critique or criticize her. Instead of a happy-face sticker or a pat on the back, a teacher or an employer is going to hand back a heavily red-penciled report and demand to know what she was thinking. Blue ribbons will not be awarded just because she walked through the classroom or office door. And no one is going to say “good job” unless she’s actually done one. And even then she might not hear it. But the child who has come to expect extrinsic reward – who has become convinced that everything she does is worthy of praise or prizes – will be the adolescent or adult who can’t handle life’s realities.

Does it lead to challenging behavior? Absolutely it can. Children know false praise when they hear it, and though they may not be able to articulate it, they know they’re not being respected. So, why should they respect you? They also know they’re going to hear “Good job!” regardless of what they do. I once came upon an anecdote from a new teacher who used praise lavishly as a way to win over his class. But when he later became frustrated because the class wasn’t focusing, he chided them for not making enough effort. In response, one student said, “What’s the point? You’ll just tell us we did fine anyway.”

From the mouths of babes.

If you’re one of the many adults stuck in this pattern, be kind to yourself by accepting that this is a very difficult habit to break! But awareness is an important initial step. You first have to hear yourself saying it. Then, if you’re determined to stop saying it, you eventually will!

Note: “Use Praise Wisely” is one of the tips I offer in my online course, “Avoid Challenging Behavior in Your Early Childhood Setting.”  and in my book, Acting Out! Avoid Behavior Challenges with Active Learning Games and Activities.