How long could you sit crisscross-applesauce before you need to move? For me, the answer is: about 20 seconds max! Unless I’m deeply, deeply engaged in something, I will change positions multiple times or start to fidget. Even while watching something absolutely fascinating on TV, I may start by sitting with my legs folded underneath me, but before long my legs are stretched out on the coffee table. Then I’m lying on my right side and, finally, my left side. And that’s all during an hour-long program.

In other words, I find it very difficult to stay completely still, even in a comfortable position. And I’m a long way from being a preschooler and among the most active segment of our population.

I’ve written before about the folly of requiring children to sit still in order to learn. But requiring them to sit crisscross-applesauce – cross-legged, with the back straight and hands in the lap – as is so often done during circle or story time, brings the issue to a whole new level.

I have no inkling when sitting like this became a “thing.” The idea, of course, is that the children will pay greater attention to the task at hand. That they’ll be more capable of listening. But wiggling and moving don’t necessarily mean they’re not listening. In fact, being required to sit like this may mean they pay even less attention, because crisscross-applesauce is a particularly challenging position. And that means it can require the majority of a child’s concentration.

When sitting crisscross-applesauce became one of the major dictates of the early childhood setting, it gave the child who’s incapable of complying one more chance to be seen as misbehaving. To break the rules. But I propose that we examine why such rules exist in the first place—rules that run contrary to what we know about children and, now, about fidgeting. If we understand that children are much more likely to be engaged when they’re comfortable, why insist that they assume a position that perhaps isn’t comfortable at all, often for long minutes at a time? Tradition is simply not a good enough reason.

So, why not offer children options? One major benefit is that they can choose the one that best meets their needs. And because they’re given that responsibility and choice, they will take the decision seriously, and there will be fewer actual behavioral issues. This is how self-regulation is acquired – not by being ordered to sit still.

Often, early childhood teachers argue that they must get children used to sitting because the children are going to have to sit in kindergarten and beyond. Unfortunately, it’s true that until policymakers begin paying attention to the research and opt for an education system that aligns with how kids learn, children will have to become accustomed to sitting in school. But it’s also true that most kids will eventually have to learn how to drive. That doesn’t mean we should stick them behind the wheel while they’re still preschoolers.

Learning to sit is a process that nature put in place. And that process involves movement, which allows children to develop their proprioceptive and vestibular systems, which allow children to be able to sit. Surely, we can’t imagine that we can do better than what nature intended.

Here are some recommendations, in addition to offering children choice:

As far as crisscross-applesauce is concerned, the time has come to do away with this tradition. Honestly, there was never a time for it in the first place.

Movement is not misbehavior! For more ideas & activities that will prevent challenging behavior before it happens, check out Rae’s latest book! Click here to learn more or to buy! 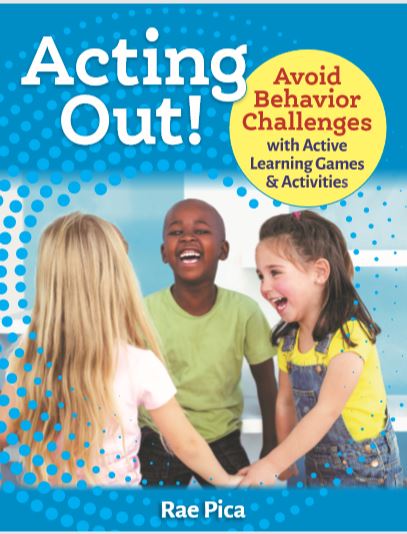 Previous Post (p) Eliminating Recess: Depriving Kids in More Ways Than You Think
Share
Next Post (n) Are Early Childhood Teachers Doing Everything Wrong? No, But...