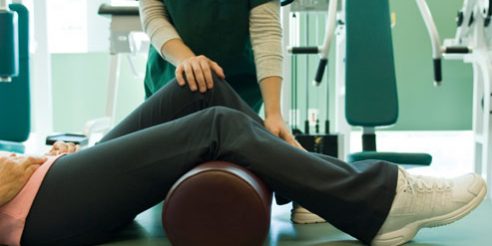 A funny thing happened on my way to stronger knees. I had just barely begun physical therapy to work the muscles around them when I realized that I’d been coddling myself for years. Because my aching joints and muscles had caused so much discomfort, I had, with just a few exceptions, become too sedentary. It wasn’t a conscious decision on my part; I simply stopped moving as much, or in certain ways, to avoid any possible pain. I mean, who wouldn’t?

It wasn’t until the therapist began putting me through my paces (and I was riding a recumbent bike – when I thought I’d never peddle anything again!) that I realized the error of my ways. Instead of building up my muscles and my strength, I had allowed my poor muscles to begin to atrophy. That, of course, was exactly the wrong thing to do – because it made it even harder for me to move. And the more I coddled myself, the greater the problems.

Soon after that, I read The Coddling of the American Mind: How Good Intentions and Bad Ideas Are Setting Up a Generation for Failure. It’s a brilliantly insightful book about the many ways in which we’re overprotecting our children and rendering them unable to “navigate the bumpy road of life.”

Early in the book, authors Greg Lukianoff and Jonathan Haidt discuss the increase in peanut allergies, which were rarely seen in American children until the mid-1990s. Prior to that, only about one in a thousand young children suffered from this allergy. But by 2008, those numbers had more than tripled.

The authors write that nobody understood why this was happening. But the obvious response to the perceived threat was to protect children “from peanuts, peanut products, and anything that had been in contact with nuts of any kind.” And, just like my inclination to reduce and restrict my movement, that was exactly the wrong thing to do. Turns out if was “precisely because parents and teachers had started protecting children from exposure to peanuts back in the 1990s” that “peanut allergies were surging.”

Wow. It’s not as though I hadn’t previously worried about the ways in which we overprotect children these days. I’ve written about how we’re making a mess of human development – creating children who can’t even stay upright in their seats – by sheltering them from such “dangers” as the outdoors and “risky play.” I’ve written that excessive caution from adults is teaching children to fear everything. I’ve written about adult decisions – banning cartwheels, tag, and even such natural joys as running – that not only keep kids from getting the physical activity they require but also from taking risks.

But that fact about peanut allergies, combined with my own recent epiphany, cemented my conviction that we are committing a terrible injustice upon today’s children.

Among other things, I too often hear from early childhood professionals that young children are exhausted after walking a block. If my muscles and cardiovascular system deteriorated after just a couple of years of coddling myself, what do we think is happening to the children’s muscles and cardiovascular system when they are made to be sedentary during this critical phase of physical development? Do we really believe things will significantly improve simply because their bodies get bigger?

Do we believe that children raised in “bubbles” will grow up to become brave, resilient risk takers when they’ve had zero experience with taking risks? Or with even the most rudimentary problem solving? If they’ve been denied the opportunity to decide what to play and the rules of that play – or how to design their own creations when even Lego projects are now prepackaged and predetermined – how will they solve the many problems life will thrown at them, let alone such dilemmas as climate change and world hunger?

Do we believe that children protected from making mistakes will know how to handle mistakes when they occur later in life? Imagine the stress and misery involved when you aren’t allowed to get anything wrong!

Muscles — whether they’re of the body, the brain, or the spirit — must be exercised, or atrophy is the natural result.

I don’t know what it will take to finally bring about change. But I’m grateful to Lukianoff and Haidt for tackling The Coddling of the American Mind. I highly recommend it. The more voices we can add to this discussion, the better it will be for our children.