“Instructional time” has long been a phrase that sets my teeth on edge, used as it is to keep children in seats and to eliminate recess from their day. But recently another phrase has me clenching my teeth. That phrase is “learning loss,” which seems to be on everybody’s lips lately. Last week I even read an article about the “devastating” learning loss preschoolers are experiencing due to the pandemic.

I’m sorry, but how devastating could it be? What learning, specifically, is being lost? The ability to meet unrealistic standards imposed on them by people who don’t understand child development, including the ridiculous expectation that they read and write by the end of kindergarten? The capacity to fill in worksheets or stare at a computer screen, or to take useless tests? The ability to handle pressure they should never have been exposed to in the first place?

As I wrote in an earlier post, I wonder when school became the end-all and be-all for children. Especially for the young ones – who, until recently in history, were never part of the schooling scene anyway and managed to do just fine. And I certainly don’t understand why so many parents and policymakers have concluded that children who don’t spend their early years in an academic setting will fall behind and remain that way for life. Fall behind in what?

As I mentioned in that earlier post, I personally had no opportunity to attend either preschool or kindergarten. We’ll never know, of course, whether my life could have been more “successful” had I attended. But if early childhood education then had looked like it does now, I would have suffered much greater learning loss had I attended. By that I mean that I would have missed out on all the hours and hours of play I participated in, which stimulated my imagination, challenged me, and developed skills I wouldn’t have otherwise acquired. I wouldn’t have had time for the daydreaming that sparked my creativity. I wouldn’t have had the opportunity to explore, investigate, discover, and gain knowledge on my own, all of which turned me into a lifelong learner.

Thankfully, when preschool and kindergarten first became more commonplace, it didn’t look as it does now. Back then, enrolled children had experiences like those I had in childhood – because adults still believed children had the right to be children! Back then, preschool and kindergarten offered opportunities for children to experience play of all kinds, through which they learned to share, take turns, negotiate, and otherwise boost their social-emotional skills. Through which they stretched their imagination, discovered their likes and dislikes, and began to develop skills in ways that would serve them for life. Nobody thought it was necessary for them to acquire first- and second-grade academic skills before the age of 6. Nobody thought children would remain unaccomplished throughout life if they didn’t spend every daytime hour at a desk and every evening agonizing over homework.

Apparently, most adults now believe that having missed a few months of what they shouldn’t have been doing in the first place, children are doomed.

But you know what? I keep hearing stories about happier, calmer children. It makes sense because, although isolated from their peers, for the first time in their young lives they have the chance to be children. Unless they’re among the unfortunate little ones forced to do worksheets or to sit in front of computers, even while at home, they’re not living according to a clock and actually have free time. They’re not stressed out because they can’t meet unrealistic expectations. They’re not forced to comply with somebody else’s idea of learning. They’re getting to play! (What a novel idea, huh?)

Let me tell you a bit about Steven Spielberg. He wasn’t thrilled with school and had average grades. But his mom always encouraged his childhood explorations and his interest in movie making. At first he simply used the family’s home movie camera to record family events. But by the time Spielberg was 16, thanks to his explorations and the freedom he had to pursue his passions, he’d already filmed a feature-length science fiction movie.

Would Spielberg have become such a successful film director if he’d been made to stop “playing” with the camera and instead attend to hours of homework? To memorize information completely irrelevant to his life in order to take endless tests? Again, we’ll never know. But his is one of hundreds of similar stories told by people whose work we know well.

Imagine, if you will, a parent who, during this rare period in history

We don’t know if these experiences will lead to lifelong pursuits. But we do know that this is the way children are meant to learn – and to discover the passions that lead to lifelong pursuits. What are children discovering when obliged to meet standards all day, every day? To properly grasp a pencil or read and write long before they’re developmentally ready? To fill out worksheets, or to pass tests created by people who don’t know the true definition of education?

Learning loss? I want to know what kind of learning we’re talking about when we utter those words. If it means children will have forgotten nonsense they were forced to memorize, I’m not going to worry about it. And I hope you won’t either.

Below is some food for thought I came across on Facebook. I love it, of course, because it so beautifully makes my point! 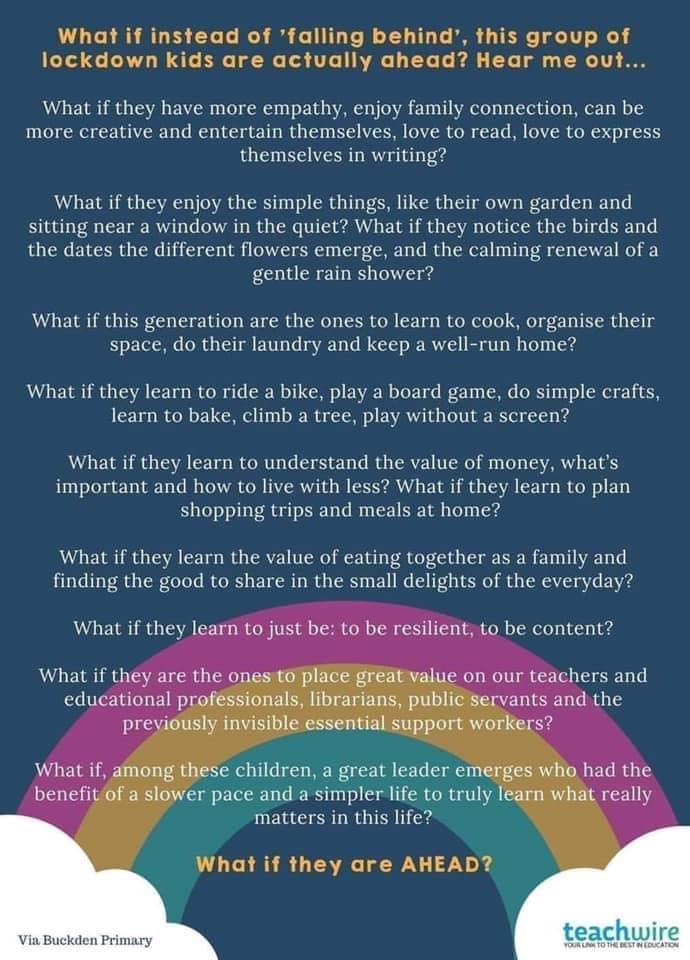 Previous Post (p) Change Must Begin with the Children: Resources for Anti-Bias Education
Share
Next Post (n) Does Virtual Learning Mean We Have No Control Over Screen Use?