What Are Today’s Children Learning from Their Childhood? 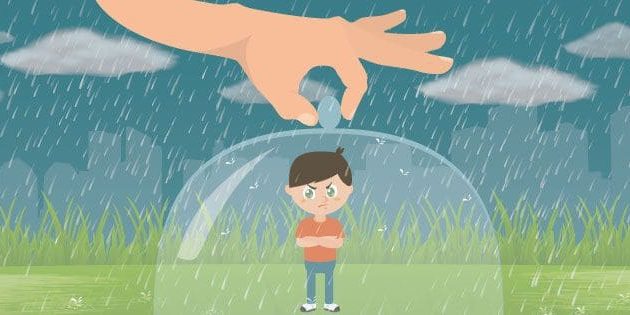 A few things inspired this blog post. One was a real estate episode on HGTV during which yet another mother declared she had to have an open concept — because otherwise she wouldn’t be able to see her children at all times and know what they were doing.

The second was a conversation with Rusty Keeler, author of Adventures in Risky Play.

And the third was the pandemic, ever-present in our minds at this point in history.

How could three such disparate things come together to create one blog post?

Well, the HGTV episode once more made me want to shake some sense into parents who believe they must have eyes on their children every waking moment of the day. (I know they only want the best for their kids. My rant is against whatever the heck caused this belief to become so common that parents aren’t remotely embarrassed to say such things with millions of people listening!)

The conversation with Rusty reminded me of my own childhood. I shared with him all sorts of “risky” things I did as a kid, including learning to do cartwheels down the middle of the street, jumping from a great height, and chasing a neighborhood boy down the road while holding a garter snake in my hand! We lamented the fact that today’s children rarely receive the time or opportunity to engage in such playful practices.

And the pandemic? Sadly, that’s the lens through which I view much of my past and present these days. BP and AP.

Both the TV show and the talk with Rusty made me wonder what my childhood would have looked like if my parents had subscribed to the same philosophy about raising children as do today’s parents. Would I have participated in any of those risky behaviors – or others – if constantly supervised? (Answer: Absolutely not!)

Or, perhaps the question should be: What would my adulthood have looked like? Because a childhood during which I was watched all the time and my choices were limited undeniably would have impacted my adulthood.

So, I began to think about some of the lessons I learned in childhood. For example, mastering those cartwheels taught me the importance of persistence – because they did not come easily. Jumping from a great height taught me I didn’t have to let my fears control me. That I could be courageous. And chasing Jimmy M. down the street with a snake in my hand? Well, that taught me not to back down from a challenge. (And it was fun!)

Naturally, these traits have overlapped in my life, but here are a few ways in which they individually affected my adulthood – specifically my career:

Now, let’s apply those lessons to the pandemic. Since it began, among other things, I’ve had to pivot from in-person speaking engagements to virtual presentations. That meant learning how to present on Zoom – both for other organizations and for my own webinars. If I hadn’t, I might well have had to go to work delivering Amazon packages. Continuing the work I’ve done for these last 40 years required all three of the traits I’ve written about here.

And there’s one other thing I’d like to talk about. Since the pandemic began – almost eight months ago now – I’ve spent almost every hour of every day here alone with my cat, Mickey. Yes, I’ve been lonely at times. Yes, I miss human interaction and touch. However, mostly I’ve been okay.

Would I have been okay if my parents had monitored my entire childhood? If they’d limited where I could go and what I could do? Had chosen most of my activities, as many of today’s parents do?

Because I could play by myself – or think or read or write – in my bedroom, in the unfinished basement, or outdoors – I learned the value of alone time. I learned that I could be alone. That I could fill my time and be content with my own company.

I don’t tell you these things to prove how “special” I am. I know you’ve been pivoting like crazy, too, in both your personal and professional lives.

No, as usual, I’m worrying about today’s children. How will they learn these things? How will they acquire the self-sufficiency that comes from being alone? The resilience that comes from trying, failing, and trying again? Where will they find the strength to solve the tough problems? These skills aren’t a given for children raised in overprotective, overscheduled households. And, as I say so often, skills don’t suddenly appear just because children have aged chronologically! These and other skills require development, and that development must begin in childhood.

When we teach children they can’t be trusted to be alone, to make their own decisions, to solve their own problems, or to take some risks and make mistakes, we’re not doing them any favors. On the contrary, we’re teaching them to become dependent, fearful, and unwilling or unable to take chances. In fact, it’s already happening! A friend who’s a middle school teacher tells me that when she places papers on the desks of her students, they sit and stare at her until given specific instructions. They’re afraid to make a move without being told what to do!

Surely this isn’t what we want for our children. Their future may not include another pandemic (fingers crossed), but it will certainly include many and varied challenges. Life is full of challenges! And I fear their childhood is not preparing today’s children to handle them.